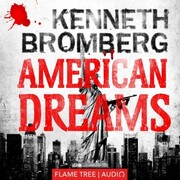 Hörbuch-Download
In 1904 Czarist Russia, four-year-old Max witnesses the rape and murder of his mother by Russian soldiers. After the boy's father extracts terrible revenge, father and son escape to New York, a teeming melting pot of immigrants. Max meets a young Polish girl, Sophie, who grows into a stunningly beautiful young woman. The two fall in love but their plans are shattered when Sophie is forced to marry a local crime boss and, once again, Max must watch as the most important person in his life is taken from him. Thus begins Max's ruthless climb to dominance of the New York underworld and Sophie's transformation from a submissive girl to a strong woman who will allow no man determine her fate. FLAME TREE PRESS is the new fiction imprint of Flame Tree Publishing. Launched in 2018 the list brings together brilliant new authors and the more established; the award winners, and exciting, original voices.
Kenneth Bromberg grew up in the beach cities of Southern California with a passion for tennis, American history, and literature. He attended the University of California, Los Angeles, after which he worked for several years as a bartender. He eventually returned to UCLA to pursue an MBA and become a certified public accountant. After retiring from accounting, Kenneth fulfilled a lifelong dream of becoming a novelist. His first work, American Dreams, is based upon stories told by his grandmother who immigrated to New York from a small Jewish village near Kiev in the first years of the 20th century.  If you like Mario Puzo's The Godfather and Ken Follett's Century Trilogy, you will love this debut novel.He lives in Santa Monica, California, with his wife of forty years.